Top 15 things to do in Atlanta 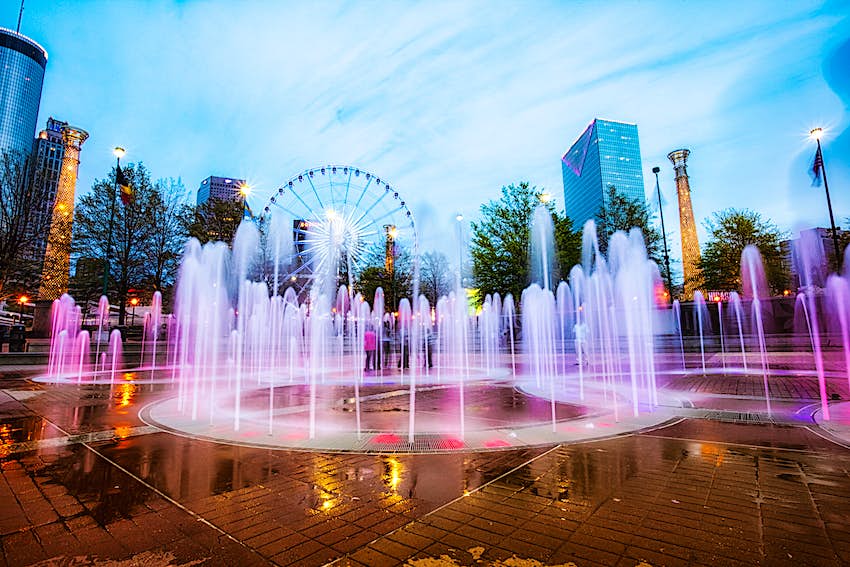 The South's so-called capital isn't nicknamed Hotlanta for nothing, y'all. Charismatic and lush, Atlanta is a feverish, easy-on-the-eyes cavalcade of culture, cuisine and Southern hospitality. Here are some of the best things to do in Atlanta.

Atlanta's once-stuffy culinary scene has evolved over the last decade into one of the most vibrant and dynamic dining scenes in the Southeast, if not the nation.

You can nosh on bountiful, filling fare around Atlanta's Southern-fried cafes or go-for-broke at many New Southern and New American foodie darlings or at trendy and upscale options – filling your belly in Atlanta ain't no joke. Top chefs like Ford Fry, Anne Quatrano, Kevin Gillespie, Kevin Rathbun and Hugh Acheson are just a few of the city's most creative cooks.

The Civil Rights movement owes a great debt to the actions of various martyrs, communities and political actions throughout the American South, but almost no aspect of the movement can be mentioned without including Atlanta and the city's most famous son, Martin Luther King, Jr.

The power of walking in the steps of this Baptist preacher turned international Civil Rights icon at the Martin Luther King, Jr. National Historic Park cannot be overstated.

Visit the High Museum of Art

As the most acclaimed museum in the Southeast, the High Museum of Art was the first to exhibit art lent from Paris' Louvre and is a destination as much for its architecture as its world-class exhibits.

The striking, bright-white art repository, with its curved ramps and monumental swooping three-story glass atrium that shelters natural light like a precious resource, is a Midtown icon. Its reflective white enamel facade stands in stark contrast to the surrounding skyscrapers and greenery. It earned its designer, Richard Meier, the 1984 Pritzker Prize.

The best time to visit Atlanta

Sleep at a historic bed & breakfast

Atlanta's neighborhoods hide a gorgeous lineup of historic Queen Anne Victorian architecture and a few of them have been converted into stunning B&Bs, mostly in the city's East Side in trendy neighborhoods such as Inman Park and Virginia-Highland.

When it comes to deciding between a cookie-cutter chain hotel in Downtown or Midtown or a stunning bed and breakfast loaded with Southern hospitality like at the Social Goat B&B or Sugar Magnolia B&B, the choice is a no brainer, ya hear? Sleep tight.

Bike or walk along the Atlanta BeltLine

Strolling or biking Atlanta BeltLine's Eastside Trail, part of the city's largest greenway and the most comprehensive transportation and economic development effort ever undertaken in Atlanta, makes for a perfect outing.

Connecting Piedmont Park in Midtown with the hip and happening neighborhood of Inman Park, this 3-mile section of the multi-use trail links big attractions such as the Atlanta Botanical Garden with some of the city's hottest bars, breweries, restaurants, markets and urban parks.

The five best parks in Atlanta

Cheer on the Braves at Truist Park

The Atlanta Braves moved into this new, 41,149-capacity stadium 10 miles northwest of downtown Atlanta in Cobb County in 2017. It was part of a $1.1-billion entertainment complex known as the Battery. The MLB season runs from late March to early October, meaning there's always time for some peanuts and crackerjack as you root for the home team.

The Braves beat the Houston Astros to win the World Series in 2021.

Piedmont Park, Atlanta's largest green space, is a pristine, 185-acre urban oasis in the middle of Midtown that has it all, from history (Atlanta's first professional baseball team played in the park from 1902–04) to numerous music and cultural festivals to bars, breweries and big-ticket attractions such as the Atlanta Botanical Garden. But it works just as well as a place to picnic, go for a run or bike ride or tuck away under a tree for an afternoon nap.

Take in a game at Mercedes-Benz Stadium

Even if you don't manage to catch a game, it's worth popping into the latest addition to the city's skyline – organized tours visit the locker rooms and field, among other behind-the-scenes locations.

Hopping from museum to museum around the big attraction-concentrated Olympic legacy Centennial Olympic Park makes for a near-effortless big day out. You can drink yourself silly on international sodas inside the World of Coca-Cola, get a history lesson inside the National Center for Civil and Human Rights, root for your favorite college football team while romping through the Chick-Fil-A College Football Hall of Fame or ogle the penguins inside the impressive Georgia Aquarium – without even breaking a sweat!

Best free things to do in Atlanta

Smack in the middle of the city (well, OK – out in Decatur, but you get the idea), you'll find this 28-acre nature preserve, home of beavers, foxes, box turtles, red-spotted newts, coyotes and veritable clouds of birds. It's a welcome slice of wilderness in the heart of an enormous urban area.

Traditionally Atlanta has lagged behind more brew-friendly Southern cities like Asheville, Nashville or Memphis due to legislation that prevented on-site beer sales at breweries.

With that law in the rearview mirror as of 2017, Atlanta is poised to become the South's next best beer city, led by one of the most iconic names in American brewing, Mitch Steele, at New Realm Brewing Co. In other Atlanta drinking news, craft cocktails form the foundation of the city's lively bar scene, which fuels nocturnal madness in hot neighborhoods from Decatur to Buckhead.

Play at the Center for Puppetry Arts

A wonderland for visitors of all ages and hands down one of Atlanta's most unique attractions, the museum – expanded in 2015 – houses a treasury of puppets, some of which you get to operate yourself. A major addition is the Worlds of Puppetry Museum, housing the most comprehensive collection of Jim Henson puppets and artifacts in the world.

The best day trips in Atlanta

Spend a night out at the Apache

An eclectic performance-art venue for hip-hop, spoken-word poetry and soul artists on the rise, this is a must-stop for those looking to dive into Atlanta's diverse Black music scene. Make sure to come with an empty stomach because the cool spot also serves up tasty Southern cuisine.

Have lunch at the Ponce City Market

Atlanta is on our 2022 Best of Travel list. For more stories from some of the world’s most exciting destinations click here.

Safety recommendations and restrictions during a pandemic can change rapidly. Lonely Planet recommends that travelers always check with local authorities for up-to-date guidance before traveling during Covid-19.

You might also like:
The most essential US civil rights sites in the South
6 transport options to help you get around in Atlanta
Atlanta's best neighborhoods

5 min read • Published about 1 hour ago

7 min read • Published about 2 hours ago