Shikoku’s Kagawa Prefecture, formerly known as Sanuki, may be the smallest of all of Japan’s 47 prefectures, but for those into exploring off the standard tourist route, Shikoku offers plenty of intrigue.

Island hop in the Inland Sea, hike up a Fuji look-alike with locals, search for your doppelgänger among 500 temple statues or try one of Japan’s legendary noodle dishes – Sanuki udon.

Fuelling interest in the creative movement is renowned “art island” in the Inland Sea, Naoshima. While Yayoi Kusama’s Yellow Pumpkin has become a symbol of Naoshima, her massive Red Pumpkin at the port invites exploration from the inside.

Formerly rural and remote, with a shrinking population, Naoshima has morphed into a world-class center for contemporary art. Even Japan’s most lauded architects have contributed to the change with museums, a boutique hotel and even a bathhouse.

All have been designed to enhance and complement the island’s natural beauty and existing settlements. Even the population is blossoming thanks to a number of Japanese leaving the big cities and resettling in the area to open cafes and inns.

The artistic magnetism of Naoshima is rubbing off on nearby islands, and for the 2022 Setouchi Triennale festival, a total of 12 islands and two mainland ports are involved in an "arts extravaganza" running through spring, summer and autumn, that will include visual arts, music, drama and dance.

On the Kagawa mainland, a can’t-miss museum is the Takamatsu City Museum of Art, located in the city’s main shopping district in the formerly austere Bank of Japan building. The Isamu Noguchi Garden Museum, east of Takamatsu city, was where the American-Japanese sculptor based himself for many years. The garden is a testament to the hope Noguchi had for art lovers.

Why Kagawa is the perfect prefecture for sustainable travelers

Peek into the Japan of yesteryear

Takamatsu city’s Ritsurin-kōen, renowned as one of Japan’s most beautiful gardens, was constructed in the mid-1600s as a walking garden for the enjoyment of the daimyō (regional lord). Stroll the park trails which wind around a series of ponds, bridges and islands. Drop into the Sanuki Folkcraft Museum or sip matcha (green tea) at teahouses scattered around the gardens.

East of the city, in Yashima, is the “village museum” of Shikoku-mura. There, traditional houses and buildings were relocated from all over Shikoku and neighboring islands to re-create a village from a bygone era. The fine kabuki stage came from Shōdoshima, famed for its traditional farmers' kabuki performances, is among the top attractions.

Marugame Castle is one of only 12 castles in Japan to have its original wooden donjon intact. The castle dates from 1597 and is known for its exquisite stone walls, moat and 1000 cherry trees that explode with blossoms every spring. It’s an easy ride by bicycle from Marugame Station.

In centuries past, most visitors to Shikoku were pilgrims trying to attain enlightenment on the 88 Sacred Temples of Shikoku Pilgrimage. The 1400km (870-mile) pilgrimage circuit has been walked for 1200 years. The last 22 of the 88 temples are in Kagawa.

The great saint of Shingon Buddhism, Kōbō Daishi, who established the pilgrimage and attained enlightenment on Shikoku, was born at Zentsū-ji, Temple 75. Trust in Buddha as you venture into the basement of the Mie-dō and traverse a lengthy passageway in pitch darkness. By moving carefully along with your hand pressed to the passageway's wall, painted with mandalas, angels and lotus flowers, you're said to be safely following Buddha's way.

Mountain-top Temple 66, Unpen-ji, “the temple in the clouds,” features 500 mesmerizing and life-like Rakan statues and is reached by its own aerial ropeway. It’s said that everyone has a doppelgänger among the 500 and looking for yours is a delight.

Temple 85, Yakuri-ji, accessed by a retro cable car that’s bound to keep kids (both young and old) happy, sits under the high cliffs of Goken-zan, east of Takamatsu.

The last of the 88 temples, Ōkubo-ji, is in the mountains in the southeast of Kagawa. But if pilgrims want to do things properly and truly complete the circle of Shikoku, they will have to return to Temple 1 in Tokushima Prefecture, for a circle is like the search for enlightenment, never-ending.

Shikoku’s most-celebrated Shinto shrine is Konpira-san, formally known as Kotohira-gū and dedicated to the guardian of mariners. If you tell a Japanese person you’ve been to Kagawa, they’ll ask if you climbed Konpira-san, famous for its exhausting 785-step climb up to the main shrine and 1368 steps to the inner shrine.

This is udon-ken (udon prefecture) and various versions of the thick, wheat-flour noodles can be found on almost every corner.

Hone-tsuki-dori is a grilled or baked chicken-on-the-bone dish, said to have originated in Marugame and is popular prefecture-wide. Try it at Ikkaku, open since 1952, a short walk from Marugame Station.

Kagawa's coastline between Shikoku and Honshu is known as the “fish tank” because it produces a variety of fresh seafood year-round. Hamachi, Japanese amberjack or yellowtail, is much-loved and often eaten on rice as hamachi-don, a Takamatsu favorite.

Shōdo-shima, one of many Inland Sea islands in the prefecture, is known throughout Japan for its production of soy sauce and olives. Popular olive-influenced dishes abound, especially “olive pork” and “olive beef” from stock raised on an olive-enriched feed mix.

On the northern coast of Shikoku and separated from the rest of the island by a line of mountains, Kagawa features some fascinating landscapes. North of the mountains are plains dotted with countless tame-ike (water-collection ponds), essential for agricultural production in centuries past.

The northern coast is surprisingly mountainous. Goshikidai, west of Takamatsu city, is an extensive lava plateau known for its picturesque scenery. The 292m-high (958ft) table-top plateau of Yashima, impossible to miss to the city’s east, was the site of a decisive battle in the Genpei Wars (1180–1185) between the Taira and Minamoto clans.

Kagawa even has its own version of Mt Fuji, 422m (1385ft) Iino-yama, known as Sanuki-Fuji for its resemblance to Japan’s highest mountain. It’s a 2- to 3-hour return hike to the top and you’ll share the trail with locals getting their daily exercise, chatting buddies and even dog-walkers.

Prefectural boundaries stretch out into the Inland Sea between Shikoku and Honshu, all part of Setonaikai National Park, Japan’s first national park designated in 1934. Kagawa’s islands, including Naoshima, Teshima and Shōdo-shima, are all in the park.

While Naoshima is firmly on visitor itineraries as “art island,” those wishing to enjoy less-visited isles will enjoy the art installations on Teshima and mountainous Shōdo-shima’s olive groves and Kanka-kei Gorge, another spot for a great day walk.

Shikoku is on our 2022 Best of Travel list. For more stories from some of the world’s most exciting destinations click here.

Safety recommendations and restrictions during a pandemic can change rapidly. Lonely Planet recommends that travelers always check with local authorities for up-to-date guidance before traveling during Covid-19.

You might also like:
Slow travel in Japan's Seto Inland Sea
Discover Japan's 10 most spectacular natural wonders
The 10 most essential places to visit in Japan

Lonely Planet has produced this article for Kagawa Prefecture Tourism Association. All editorial views are those of Lonely Planet alone and reflect our policy of editorial independence and impartiality. 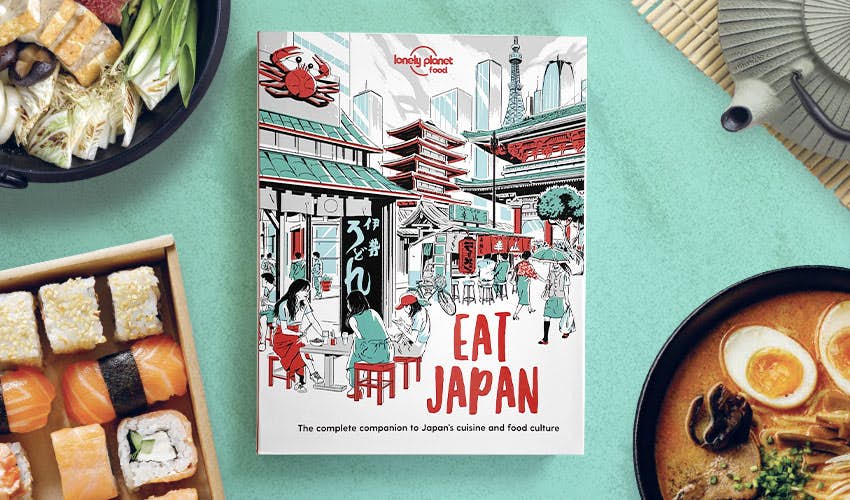 To help you feel prepared for the Japanese food scene we'll cover how, when and where to eat, etiquette dos and don'ts and what classic regional specialties are a must-try. You'll find the best places to eat in every region as well as what to order when you're there and how to eat it.

7 min read • Published about 4 hours ago