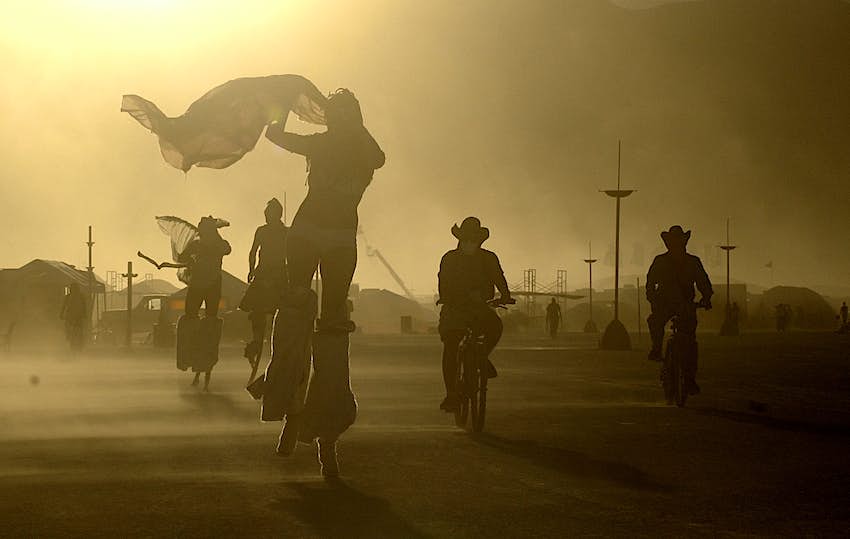 Earlier this year we were told that Burning Man was moving to the multiverse instead of Black Rock Desert due to health and safety concerns amid the COVID-19 pandemic. Information was scant at the time but now as 'Burn Week' draws near, organizers have revealed program details of the virtual version which includes eight recognized universes of the Burning Man Universe, one official virtual Temple and a soon-to-be-announced Build Your Own Man Burn night. So get the fluorescent body paint, sequins and faux fur ready and let's go!

The online festival will take place between August 30 and September 6 and is described as "Burning Man Universe: A global quantum kaleidoscope of possibility" which all sounds very Burning Man. Attendees can participate in the event from their own homes through a smartphone, laptop or virtual reality headset instead of the chalky landscape of the Nevada desert. They're also encouraged to build their Burning Man universes wherever they can find safe and socially distant space.

One particular universe, the Multiverse, is described as a "full-scale, virtual interactive Black Rock City, including the deep playa" with every street and every theme camp present. Each camp has the ability to broadcast content live. Attendees can register their own camp online and organizers will issue them with a link they can use to stream their own parties, talks and exhibitions.

The website confirms that there will be some sort of ticket system for online Burners to cover costs, as well as to support nonprofits like Burners Without Borders and Fly Ranch. "It won’t be like the BRC we’ve built over the years; we know there’s no substitute for an in-person experience," the site says. "It will be a new kind of Burn. We want to co-create BRC online with 100,000 participants to share our passions, explore fun new ways to live more sustainably, connect in these challenging times, and take care of one another."

Organisers said they are also working out refunds for people who bought tickets to this year's festival in the Black Rock Desert. Full refunds of its $475 (£379) tickets and $140(£112) vehicle passes are available but organisers are also asking buyers to donate all or a portion of their ticket value to the organisation if they can afford to do so, to aid its survival.

For the full program guide, including information on the Burn Week universes, see here.

7 min read • Published about 1 hour ago

3 min read • Published about 1 hour ago

5 min read • Published about 2 hours ago

7 min read • Published about 3 hours ago