14 places to go to enjoy the best of France 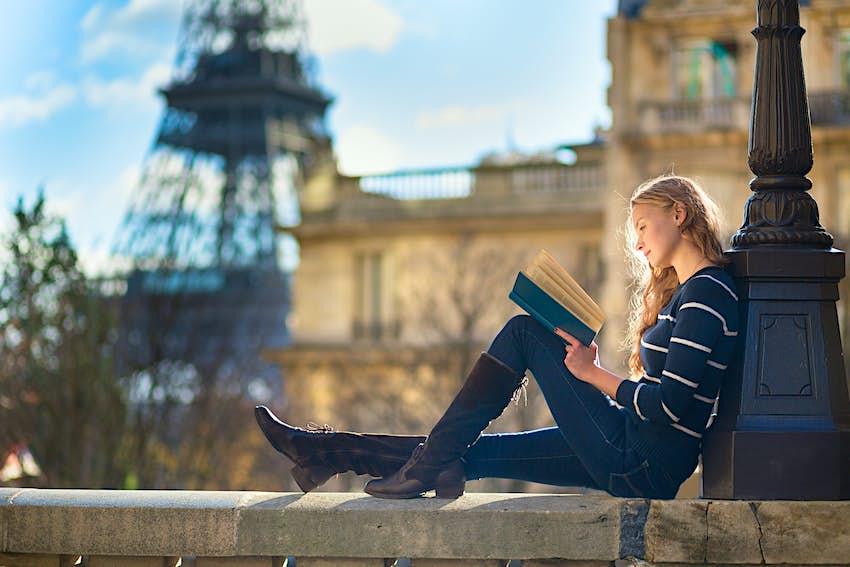 Paris, a view and a novel – the holy trinity for travelers to France © Ekaterina Pokrovsky / Shutterstock

One of the world's most popular travel destinations, France is the land of love, fine wine, gratifying gastronomy and landmarks that feature on pretty much every bucket list. If you haven't been to France, so they say, you haven't lived.

There's so much to take in: world-class art and architecture; gorgeous beaches; medieval market towns; vibrant cities; Renaissance châteaux; phenomenal cuisine; sprawling vineyards; magnificent landscapes; and the mountain wonders of the Alps and Pyrennes. So how do you decide where to go on your visit to France? To help you plan your trip, here are the country's highlights.

The city of Paris is awash with world-class landmarks that need no introduction – the Louvre, Notre Dame, the Arc de Triomphe and Sacré-Cœur among them, along with a trove of smaller specialist museums and galleries. More than six million people visit the Eiffel Tower annually, and a visit is magical, whether you come for an evening ascent amid twinkling lights over a flute of Champagne or a lazy lunch in one of its restaurants.

But a just-as-integral part of Paris' attraction is simply flânerie – city strolling without any particular goal in mind. You'll discover lesser-known sights, from laid-back parks and hidden squares to vibrant street art and cute bars and brasseries, with plenty of surprises along the way.

The dramatic play of tides on this abbey-island in Normandy is magical and mysterious. The rich history and legends of Mont St-Michel can be keenly felt as you make your way across the bridge – or barefoot across rippled sand – to its stunning architectural ensemble. Celtic mythology marks this spot as a tomb for the souls of the dead, and subsequent Christian residents topped the island with soaring abbey spires.

When the tide is out, you can walk all the way around Mont St-Michel, a distance of about 0.6 miles (1km), with a guide (doing so on your own is very risky). The Mont’s one main street, the Grande Rue, leads up the slope to the abbey, passing souvenir stores and places to eat. Be prepared for lots of steps, some of them spiral – it’s one of the least accessible sites in France.

Mountains loom large almost everywhere you look in Chamonix, the birthplace of mountaineering and a famous winter playground to the rich, famous and not-so-famous. At this iconic French Alps ski resort, snow-sports fiends fly down slopes on skis or boards, surrounded by breathtaking views of Mont Blanc and surrounding mountains. But there's absolutely no obligation to take to the pistes: nonskiers can hop aboard the Aiguille du Midi cable car – and onwards to Italy aboard the Télécabine Panoramique Mont Blanc – for the ride of a lifetime above 3800m. In the summer months, enjoy hundreds of miles of hiking and biking trails.

A trip to the thought-provoking D-Day Beaches is one of France's most emotional journeys. From the coastal port of Le Havre, you can follow the shoreline past broad stretches of fine sand and breeze-blown bluffs that echoed with a cacophony of gunfire and explosions during WWII. The Normandy landings were the largest seaborne invasion in history – and one of the most tragic. While you try to comprehend the vastness of what happened here, roam north to Étretat for some peaceful contemplation amongst the chalk cliffs and arches.

The most famous of the D-Day beaches, Omaha Beach, is backed by long rows of symmetrical gravestones at the Normandy American Cemetery & Memorial – a solemn, silent testament to the profound price paid for France's liberation from Nazi tyranny. Caen’s Le Mémorial and Bayeux’ Musée Mémorial provide comprehensive overviews of the events of D-Day. Dozens of villages near the landing beaches also have museums focusing on local events.

Perched on a rocky hilltop and bristling with zigzag battlements, stout walls and spiky turrets, the fortified city of Carcassonne in the Languedoc looks like something out of a children’s storybook. A Unesco World Heritage Site since 1997, it’s most people’s idea of the perfect medieval castle – that first glimpse of it is enough to make your hair stand on end.

To properly savor this fairy-tale walled city, linger at dusk after the crowds have left, when the old town belongs to its 100 or so inhabitants and the few visitors staying at the handful of lovely hotels within its ramparts. Don't forget to look back when you leave to view the old city, beautifully illuminated, glowing in the warm night.

Famous-name Champagne houses in the main towns of Reims and Épernay are celebrated the world over. But much of Champagne's finest liquid gold is created by passionate, small-scale vignerons (winegrowers) in drop-dead-gorgeous villages. Exploring the region's scenic routes by bike or car is by far the loveliest way to sample fine bubbly, in a landscape of rolling vineyards.

Cellar visits reveal the magical processes – governed by the strictest of rules – that transform the world’s most pampered pinot noir, pinot meunier and chardonnay grapes into this Unesco World Heritage-listed region’s most fabled wines. Explore the region’s best Champagne museum, the Musée de la Vigne et du Vin, in Le Mesnil-sur-Oger, followed by a tasting and lunch in the village at Le Mesnil.

If it's aristocratic pomp and architectural splendor you're after, the regal Loire Valley is the place to linger. The valley is riddled with beautiful châteaux sporting glittering turrets and ballrooms, lavish cupolas and chapels. To be blinded by brilliance, you can’t miss the big three: François I’s country extravaganza Chambord; Renaissance-era, river-spanning Chenonceau; and the supremely graceful – and superbly furnished – Cheverny.

If you're a hopeless romantic seeking the perfect fairy-tale castle, head for moat-ringed Azay-le-Rideau, Villandry and its gardens, and less-visited Château de Beauregard. Flowing for more than 620 miles (1000km) into the Atlantic Ocean, the Loire is one of France's last fleuves sauvages (untamed rivers) and its banks provide a 1000-year snapshot of French high society.

Nice and the Three Corniches

With its mix of real-city grit, old-world opulence, year-round sunshine, vibrant street life and stunning sand, Nice is extraordinary. Officially there are 25 named beaches strung out along the Baie des Anges, some of which are free, others of which are for paying sun-seekers only. One of the best ways to appreciate the coastline is outside the city on the drive between Nice and Monaco, one of France's best road trips.

The Three Corniches is a dramatic trio of coastal roads, each one higher and more winding than the next, but all offering absorbing views of the sweeping blue sea fringing Europe's most mythical coastline. It's impossible to drive this route without conjuring up cinematic images of Grace Kelly, Alfred Hitchcock, the glitz of Riviera high life, and the glamour of the Monaco set. To make a perfect day out of it, shop for a picnic at the Cours Saleya morning market before leaving Nice.

Outstanding museums, a dynamic cultural life, busy clubbing and drinking scenes, a thriving university and fantastic shopping lend Lyon a distinctly sophisticated air. Lyon is also celebrated as the gastronomic capital of France (though many other cities also claim the crown). Adventurous gourmands can indulge in their wildest foodie fantasies – you won't want to leave the city without sampling some Lyonnais specialties in a bouchon (small bistro). Local cuisine together with quaint culinary customs, such as totting up the bill on the paper tablecloth, or serving wine in a glass bottle wrapped with an elastic band to stop drips, make Lyon's bouchons unique even in foodie France.

Southern France has no shortage of superb Roman sites, but nothing can top the Unesco World Heritage-listed Pont du Gard, which lies about one mile (2km) south of the village of Vers-Pont-du-Gard. One of the most impressive surviving Roman ruins in Europe, this exceptionally well-preserved aqueduct is simply remarkable. Thirty-five arches straddle the Roman aqueduct's 275m-long upper tier, containing a watercourse that was designed to carry 20,000 cubic meters of water per day.

At the visitors center on the northern bank, there's an impressive, high-tech museum explaining more about the bridge, the aqueduct and the role of water in Roman society. View the bridge from afloat a canoe on the River Gard and take your swimming gear for some daredevil diving and high jumping from the rocks nearby. Pont du Gard is an easy day trip from towns such as Nîmes, Uzès and Avignon, but there are also places to stay within walking distance.

It is for one reason alone that most people venture to pretty Pyla-sur-Mer: to excitedly scamper up, and frolic on, the curvaceous sands of Europe's largest sand dune. The Dune du Pilat is a "mountain" that has to be climbed, and gleefully romped down at speed. Not only is the coastal panorama from the top a stunner – ogle at the Banc d'Arguin bird reserve and Cap Ferret across the bay – but nearby beaches have some of the Atlantic Coast's best surf. Cycle here from Arcachon and feast afterward on locally farmed oysters and crepinettes (local sausages) at place-to-be-seen La Co(o)rniche.

The Route des Vins d'Alsace is one of France's most popular drives – and for good reason. Starting from Strasbourg, you can meander through a kaleidoscope of lush green vines, perched castles and gentle mist-covered mountains. The only pit stops en route are half-timbered villages and roadside wine cellars, where fruity Alsace vintages can be swirled, tasted and bought. To be truly wooed, drive the Route in fall (autumn) when vines are heavy with grapes waiting to be harvested and colors are at their vibrant best.

Spreading out across the plains inland from the Baie de Quiberon, the megaliths of Carnac are one of the great wonders of the ancient world – a huge complex of ancient stone alignments, constructed by Neolithic people between 5000 BCE and 3500 BCE. The best way to appreciate the stones' sheer numbers is to walk or bike between the Ménec and Kerlescan groups. Pedaling past open fields dotted with these mysterious standing stones raises some fascinating questions about Brittany's ancient human inhabitants.

No one knows for sure what inspired these gigantic structures to be built. A sun god? Some phallic fertility cult? Find out more at the Maison des Mégalithes in Carnac. Afterward, mull over the mystery on La Grande Plage, Carnac’s longest and most popular beach, with a 2km-long stretch of pearly white sand.

Impossibly perched on a rocky peak above the Mediterranean, gloriously lost in the backcountry, fortified or château-topped… The portfolio of villages perchés dotted around the Luberon massif is vast and impressive. Exploring these loft settlements calls for go-slow touring on foot, by bicycle or car. Most villages are medieval, built from golden stone and riddled with cobbled lanes, flower-filled alleys and hidden squares silent but for the glug of a fountain.

You'll find spellbinding views of the Med and windy pebbled lanes in magical Èze near Nice, while sand-colored Gordes is arguably the most dramatic of all the Luberon's hillside villages. Combine a village visit with lunch alfresco – Restaurant Dan B near Aix-en-Provence is one dreamy address that you'll never want to leave.

You might also like:
France’s 10 most stunning road trips
First-time France: where to go and what to do
Best things to do with kids in France

With more than 300 suggestions for destinations across Europe and the best time of year to experience them, this book is the ultimate trip planner for every month of the year.

6 most festive day trips from Toronto this winter

5 min read • Published about 23 hours ago

How to get around in Scotland: find the best transportation for your trip

5 min read • Published about 24 hours ago

Step inside a Monet painting at a new exhibition in Miami